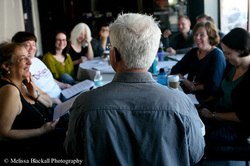 “In the world of theater, the ability to make up your own projects rather than rely on outside sources is critical."
WORKSHOPS, LECTURES AND MASTER CLASSES